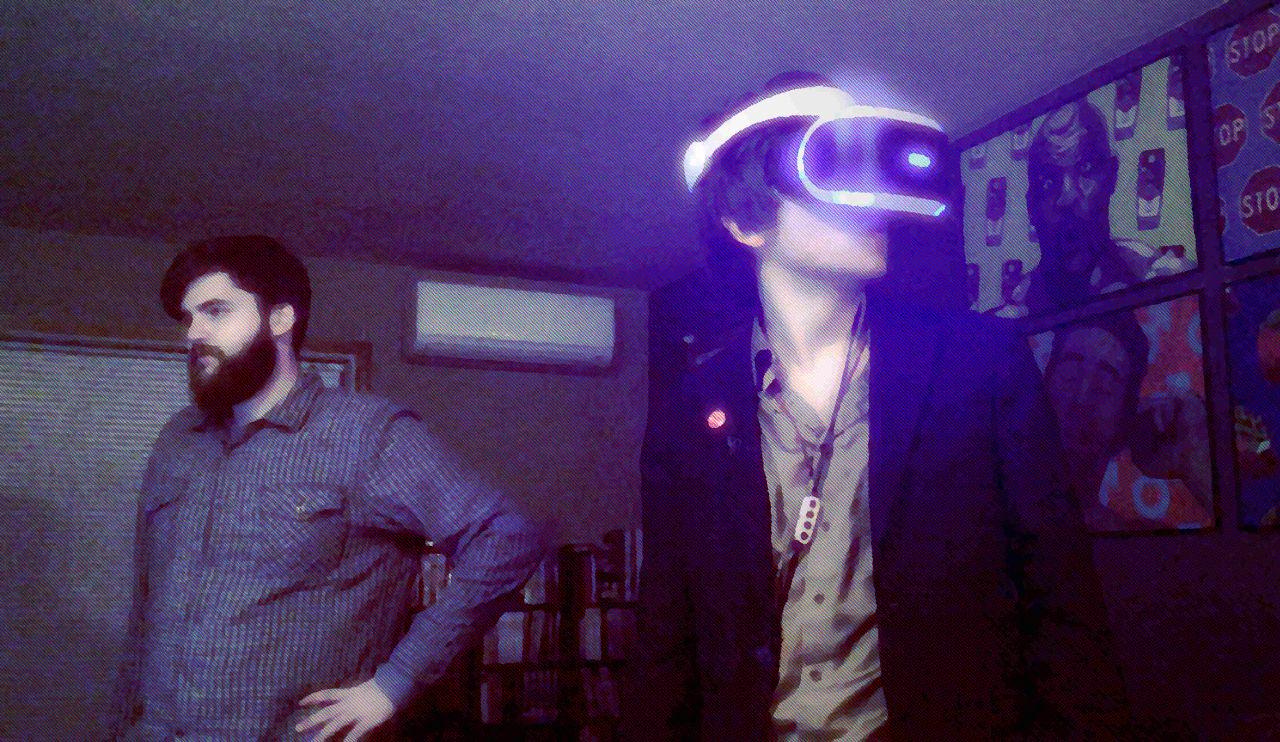 A late geezer’s first go at the dystopian VR experience

Earlier this year, Tim and I had the opportunity to try virtual reality at the True/False Film Festival in a dark, curtained side room of a commandeered Columbia art gallery, but we were both much too intoxicated and loopy those last few hours of the fest, and we bailed. Call us cowards if you must — immersion can be a scary concept to those of us who grew up reading science fiction, before the existence of the modern video game console. I’ve wanted just 30 seconds or so with a pair of goggles, just to have an idea of what the increasing number of Oculus-blinded pedestrians surrounding me are looking at. Thanks to Isiah, I was finally caught up last night with a few VR YouTube videos and Farpoint’s introduction on a PlayStation 4.

First, Isiah brings me the headset and describes in detail how exactly to adjust it, but I forget it all and simply try to shove it directly and violently on my face. Eventually, he takes it back and simply mounts and adjusts it around my monstrous skull — like you would for a toddler — and I lay eyes on the console for the first time. For whatever reason, it never occurred to me that general GUI wouldn’t simply be displayed in 2D, but by a literal virtual display, layed out in front of me like a large, floor-mounted touch workstation. I’m astonished by my ability to turn away from it to look at the rest of Goggleworld, which is nothing but a deeply black void.

From my previous world, I hear Isiah and Hawthorn discussing what to show me first, and YouTube is the settled-upon environment. As the application is restarted in “VR Mode,” its startup screen is what really establishes the truth — I have gone virtual. I cannot use my hands to shield my eyes from the branding’s glaring watermark and terrifying red light. At its home menu, Isiah simply selects the “VR” tab, revealing a selection of thumbnails for algorithmically-recommended VR-shot videos on the service.

To begin, I am mounted on the tail of a superbike as it’s raced around an American desert circuit. It takes a few seconds for high resolution to buffer, leaving me briefly in a pixelized hell that would surely make anyone sick, were they exposed very long. (I was especially excited to become nauseous, to no avail.) At the getgo, I am occupied with the rider’s butt since it’s center-frame if I stand in my usual posture. Isiah points out the hovering HUD to my left containing a selection of simulated digital instruments (tachometer, 7-segment speedo, etc.) Its presence would suggest that the purpose of my virtual passengership is to witness the lap as a motorsport enthusiast, but the rear of the rider obscures most of my view forward — I cannot admire his line as one would viewing a GoPro-or-otherwise POV of the same event, so I decide to try and figure out which track I am hurried through. Though the vehicle is tossed about in the required movements of motorbike operation, I myself (the VR capture device) am impressively gyrostabilized, and the image, static, as if I’m actually hovering above the pair as they moved along. I spin left and right, spotting a small gaggle of miniature wind turbines and two wilting hilltop trees in the foreground. Behind them, small sand dunes fill the space, all the way to the horizon.

After a few minutes, I am finally relieved early of my cutless lap for a short National Geographic documentary on a Viking revival festival in Poland. I’m introduced to its Big Boys by a series of aerial shots (presumably by drone, which is awfully un-Vikinglike) as they row their Big Boat up(?) a relatively wide, tree-lined river. In contrast with the lap, the jump cuts become a bit disorienting — I am eventually jumped in the boat for a moment, next to the sweaty, bearded lads — a few of whom are shirtless. I notice a blurry church on the distant bank. Suddenly, I float briskly across the small no man’s land between two rapidly advancing battle lines of Nordic Nerds with real, era-specific weapons and way too much free time. More lingering drone shots follow from just a few feet above the ensuing conflict. Outside, Isiah confirms Hawthorn’s suggestion that this is, indeed, the one where they use real weapons as I notice a pile of three or four men lying against each other, motionless on the ground, right-of-center in the nearest line, and mull over the sure disturbance of all this immersion the festival has allowed in welcoming the presence of the surely-buzzing drone. I guess they’re dead.

After the conflict, I am subjected to a dreamier, narrated montage accompanied by cheesy synthesized orchestral music and featuring disproportionately a particular man with a shiny, tatted bald head and rather large feet with rather small toes, which he likes to wiggle during these particular conversations. Thanks to VR’s omniencompassing perspective, I am allowed to observe his wiggling in his every appearance. The tone of the background music and the prevalence of relaxed, conversing couples and sunsets in the scenes suggest romanticism is the montage’s theme, but for me, it is the bald man’s feet — I am too busy conversing with my two friends, across the divide, in this world, to listen to any of what is said. Considering that YouTube collects the dimensional data regarding where the user looks, and for how long, I make an effort to bend my neck up and down in extremes, and notice a patch of washed-out sky, distorting in the distance, and ponder what — if anything — we have gained in this technology. 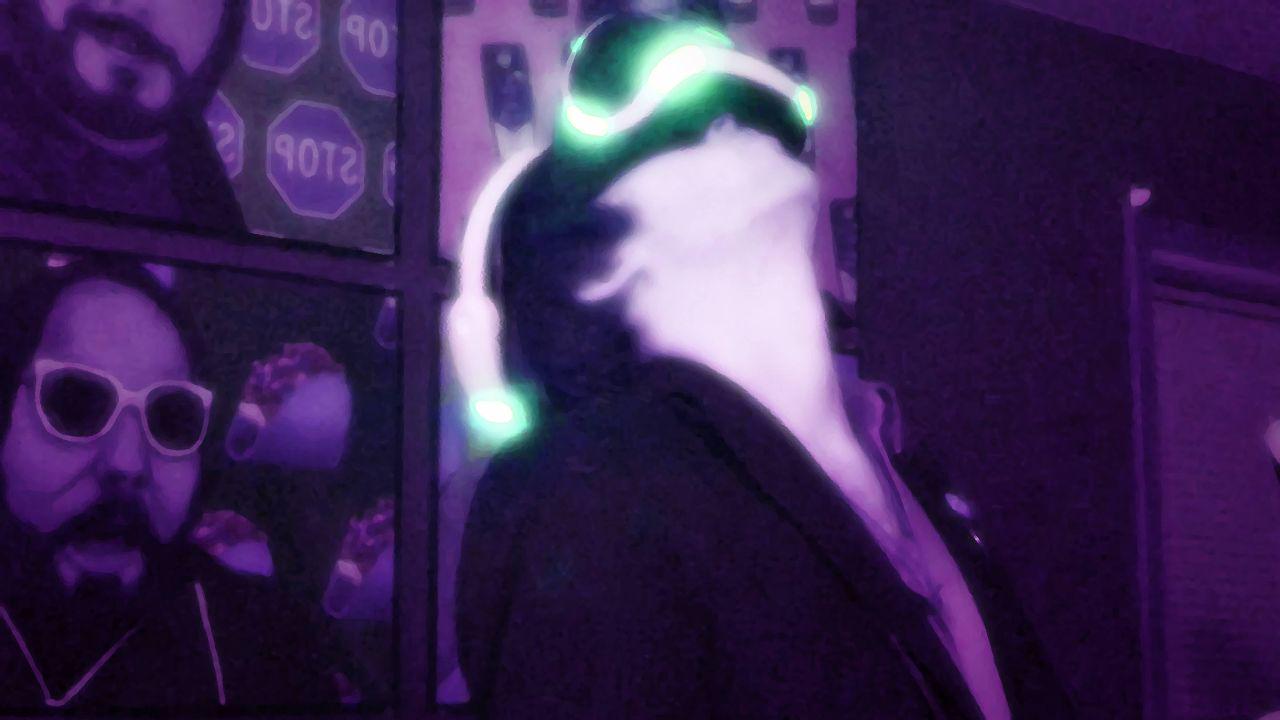 Does an increase in the raw amount of visual data available to the viewer actually make motion picture storytelling more effective? In the few minutes of my VR taste test, I did gain quite a bit of volition over an equivalent 2D experience, but it didn’t seem like I’d instinctively used it to gain much else. If one is specifically interested in the shrubbery around a racetrack, or the more nuanced undulations of a Viking’s foot, they can more likely than not find a standard video on the World Wide Web that would more efficiently entertain them. In specific situations, of course, a producer can undoubtedly benefit by the ability to capture in 360 degrees, but — in any sort of cinema, especially — it seems unnecessarily sacrificial to relinquish entirely the narrative directorial control of shot framing to their audience. However, I am the antiexpert on this subject, obviously. My take on the viability of VR is Virtually Redundant and — quite possibly — very wrong, but my time in its hell is not over yet.

Isiah explains that it is time for me to game, and asks if I’d like to try “the one with the hands, or the one with the gun.” As always, I choose the firearm, as the “hands” have not been found yet and the hypothetical image immediately offered up by my imagination is of rusty iron shackles. The Infinite Blackness has returned, and I cannot see beyond it to determine what my host is up to. Then, it becomes outer space — filling with thousands of starlike white dots. The light-blue outline of a virtual PlayStation controller appears where I assume him to be, unattached and bumbling about. Soon, it jaggedly approaches, and I feel him hand it to me. We have started its calibration process, which becomes a bit frightening in my celestial surroundings, though at least I have now gained participatory power over my new existence. I’d opted out of wearing headphones, so the assistant’s malignant-sounding female British voice comes softly from the television somewhere in front of me as I point the beam of light the controller’s representation is now projecting straight forward at the navigational arrows displayed ahead and pull “the trigger” (R2.)

I am pleased by the idea of interfacing with software exclusively by shooting it repeatedly before I am abruptly contained in a cage, now being projected by a virtualization of the system’s sensor, which is unsettling. I am now calibrating the hardware contained within the physical device that captures the position of my body in the physical world. I catch the word “confinement” in the assistant’s unending, otherwise-inaudible directions, and quicken my pace. When it’s all done, I return the controller to Isiah, who reboots the PS4, itself, before launching Farpoint. My space becomes a lighter blue and fills with little opaque bits of Sony Dust for a minute or two. Isiah continues his rummaging for another peripheral as the title’s introduction begins to play.

Two rather poorly-animated astronauts are co-hosting a live broadcast from their craft, which is presented in a dramatization of a computer display. They’ve just met, but they’re both stacked with academia, co-massaging their knowledge, which I choose not to listen to. Out of view, Isiah unsuccessfully attempts to skip the whole thing before I’m allowed to become virtual again — this time, atop the animated body of another astronaut in a lone shuttle, approaching the mothership where it holds, next to a large, very-Star Trek “anomaly.” From Deep Space Nine, the two scientists continue to bicker over comms as I look around the cockpit. Looking backwards has already become a favorite habit of mine — I wonder where the shuttle’s bathroom is. For whatever reason, the back of my character’s neck was animated, though it can only be seen by looking rearwards and down, which distorts its shape into something truly terrifying.

A bunch of unrelated plot follows, leading me to end up on a foreign world, exiting my crashed escape pod. By now, Isiah has connected The Gun, but something about it isn’t quite right — my character holds it in a glitched, very uncomfortable-looking manner, and it’s suspected that a fix would require a restart, and therefore — a replay of the introductory cutscene — so I retire out of lack of patience.

If I were confidently reviewing PlayStation VR as a consumer purchase, I’d cite a quote of Isiah’s: “I couldn’t find the thing.” In addition to my first drone sighting, a few days ago in Colorado, this lost virtual virginity is not necessarily unwelcome — I feel as though I’ve acquired a platform to better ponder the dystopia to which these and their like industries add a certain comic spice. That said, I cannot imagine a reason to once again enter the digital realm — and who cares?